Clone consoles are nothing new to the scene and Retro-Bit aren’t either. The company are known for making replacement accessories to your old consoles and plug-and-play consoles such as the RetroDuo Portable and Super Retro-Cade with 90 games built-in. One system that has received praise in the past is the RetroTRIO which allows you to play NES, SNES, and Sega Genesis games all on the same system. One complaint these received was a HDMI port for newer TVs. Up until now you had needed a TV with AV input or an AV to HDMI converter, but now with the release of the RetroTRIO Plus 3 you don’t have to worry about it anymore.

One thing you will notice is that when you open up the front to plug the controller into, it looks like a complete mess. This is because there are numerous plug-ins that allow you to use Genesis, SNES, and NES controllers. The retro-bit controllers that come with it work as well as other 3rd party and officially licensed controllers to work without a hitch. There are switches that allow you to switch between what kind of controller you are using, as well as switches to tell the system what region the games you are playing. For example, if you are playing a Genesis game that was exclusive to Japan, you will have to set that switch to NJ. Same goes for Australia (PA), Europe (PE), and North America (NTSC). 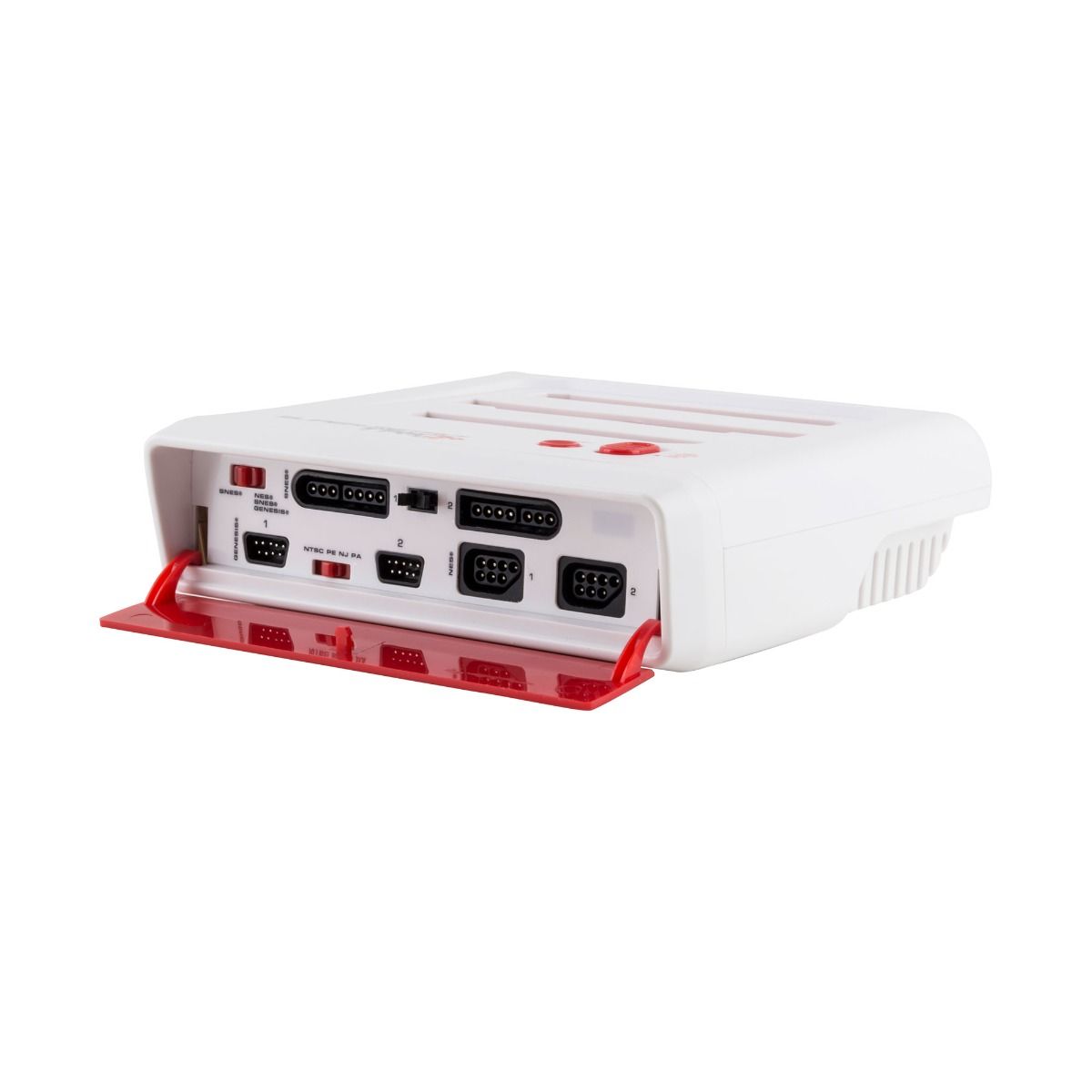 While other retro consoles use emulation, Retro-Bit’s Super RetroTRIO uses the real hardware. This makes the games that use the SuperFX chip like Star Fox or Stunt Race run without any problems. It’s something that clone consoles, especially emulation, has a problem running. For reference, we also tried out the Super Game Boy, Famicom, and a reproduction cart we got burned on awhile back on. All three of these ran without a hitch and didn’t notice any kind of issues while testing each of these out. It also works on different formatted games such as Mega Drive and Super Famicom games.

As far as complaints, I do have one with the controller. While the controllers feature a sleek design, it is weird getting adjusted to the shoulder buttons. Those are designed in the same way as the Sega Saturn where they are on a hinge and feel like you have to push down on the entire thing to get a response. Besides that, the controllers do feel comfortable in your hands. Another is that it is fairly easy to bend the pins within the console. Therefore, we recommend that when you are removing your cartridges to remove them at an angle. Start by lifting one side up until it is out, then remove the other side. It’s tedious, but necessary to make the console last longer without any issues. 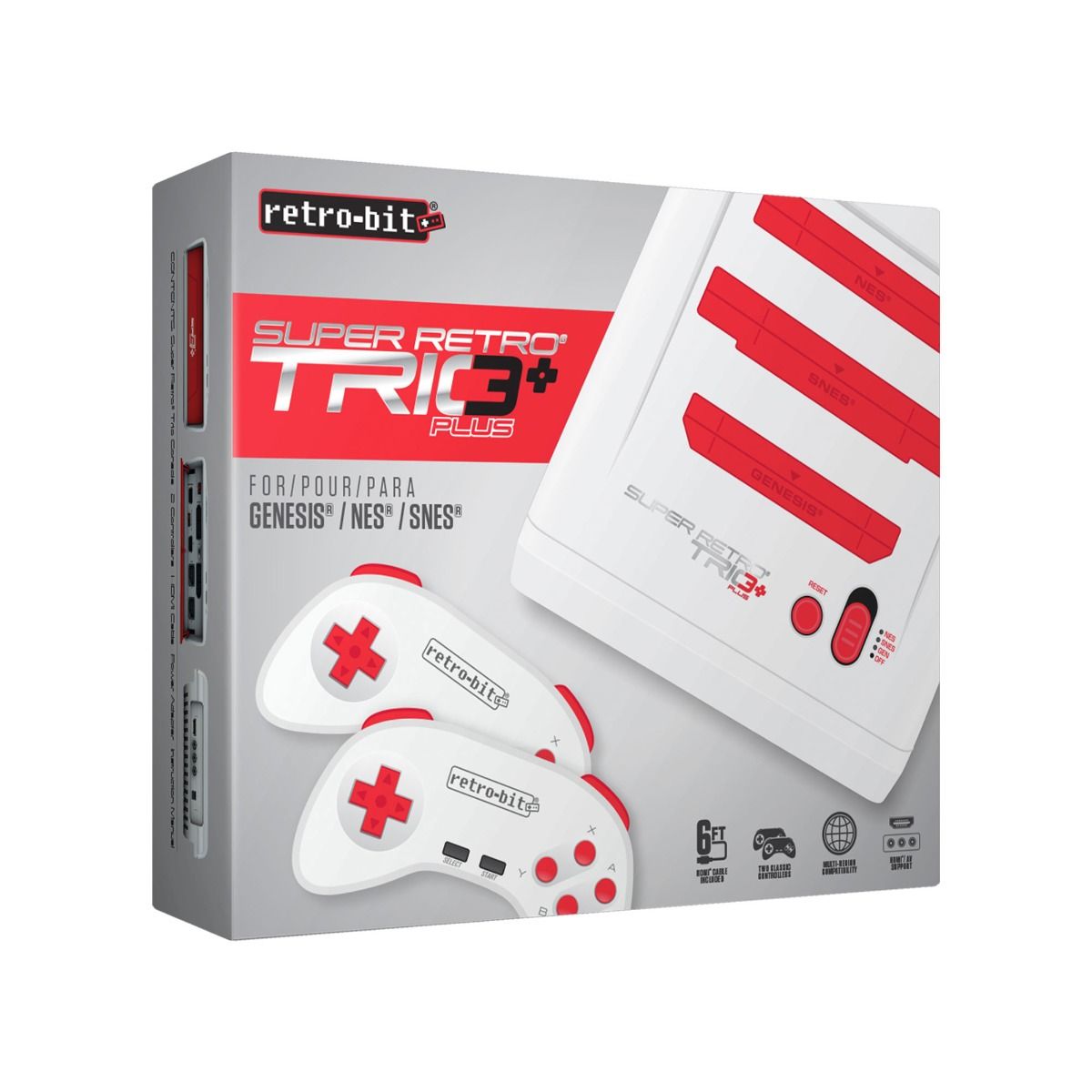 In conclusion, this is a must-buy for those who wish to play their Genesis, SNES, and NES games without paying for each console individually. At $79.99 retail, this is a steal compared to purchasing each system individually. You will also not have to worry about having any issues as the console does come with a 1-year warranty through Retro-Bit. Those who are collectors or are super nostalgic might give this a pass as you will prefer to have the real consoles. If you don’t fall into this category, then I cannot recommend this enough.

Disclosure: I (Ryan) am on the payroll for a company who are official distributors of Retro-Bit products. This is how I was able to obtain the console to test out and Retro-Bit do not have any affiliation with this review.

This article has been Digiproved © 2018All Rights Reserved
In this article:Genesis, NES, Nintendo, Retro, Retro-Bit, Review, Sega, SNES, Super RetroTRIP 3 Plus